The other day I read the introduction to Richard Sennett’s, Flesh and Stone: The Body and the City in Western Civilization. What an incredible piece — perfect example of why I love introductory essays.

Sennett here is writing a history of the physical aspect of life in the cities I have been learning about all my life: Athens, Rome, Paris, London. He isn’t interested in an intellectual history: just a bunch of Western thoughts traveling along from one place to another. Instead, he writes, “I was prompted to write this history out of bafflement with a contemporary problem: the sensory deprivation which seems to curse most modern building: the dullness, the monotony, and the tactile sterility which afflicts the urban environment.” With the context of history, Sennett introduces us to the ways citizens have lived differently in the past and the role of the city in protecting and facilitating human interactions.

Additionally, Sennett conjures a common conflict within this history that sets Western cultures in opposition to the body. He writes, “Western civilization has had persistent trouble in honoring the dignity of the body and diversity of human bodies …” from the Greek ideal of male athletes to the multicultural communities of modern Greenwich Village (15).

Consistently returning to the current experience, Sennett writes that rather than interacting with other people while accomplishing daily tasks, even literally bumping into them, many of us live from one contained space to another: the home, the car, the office.

Today, more sensory experiences are now consumed with little required input. Pleasure and pain are most often experienced through television, movies, and video games and even the greatest cities are most often viewed through the windshield of a car. Distances that once involved hours and innumerable human interactions now require only 10-15 minutes of driving. “Both the highway engineer and the television director create what could be called ‘freedom from resistance.'” Sennett is writing from the vantage of this society we’ve created for ourselves in order to prevent unplanned, unwarranted encounter. “Thus the new geography reinforces the mass media. The traveller, like the television viewer, experiences the world in narcotic terms…” (18).

After looking through my books, multiple friends have commented that the large font of Flesh and Stone “stands out” on the shelf or that the title is “weird”. I think Sennett (or his publisher) chose the title partly in order to make people uncomfortable. The fact that it sounds sort of like an adult romance novel is definitely connected to Sennett’s thoughts on contemporary life and our discomfort with even the word “flesh.” Sennett is concerned for the experience of the body in the city in and most importantly the way that social behavior reinforces social connection far more than in merely romantic terms. He writes, “much as today in small southern Italian towns a person will reach out and grip you hand or forearm in order to talk seriously to you” (21).

When I read that particular example I was struck by the simple idea of it and how far it is from normal behavior among my friends and family. Sennett writes to teach us about ourselves and the lives that we live, sometimes prescribed by urban design and other times by cultural tradition we have forgot to even notice

Finally, Sennett concludes with a personal note about the origins of his research, particularly within the context of his friendship to the late Michel Foucault. When they began in the 1970s, he writes that Foucault envisioned human bodies as constrained by tradition, culture, and “choked by the knot of power.” But as he observed Foucault in his last days, Sennett noticed that the fixation on power and control began to relax. As a result, the book that he completed is not the research that Sennett began decades before.

Particularly, he pushed his research beyond simply the realm of human sexuality and, to honor his late friend, embrace the numerous aspects of life that provide meaning and value. He writes, “If liberating the body from Victorian sexual constraints was a great event in modern culture, this liberation also entailed the narrowing of physical sensibility to sexual desire” (26). This narrowing, to Sennett, is no longer necessary or helpful toward understanding human social interaction. As in the example from Italy (I think the Instagram account @notmynonni is a fitting connection here) there are a million meaningful moments in a life that deserve our attention.

Ever-committed also to his hope in the potential of the city, Sennett writes from the Judeo-Christian perspective that the body is connected to the spirit, valued and important. Although I don’t think Sennett is a Christian today (in more recent interviews it seems like he identifies as a secular humanist), at the time of writing this book he identified as a “believer” and acknowledged this perspective in his research. While conceding the Biblical idea of “the fall” and great separation between humans (loss of trust, for example) he also shares the way that his faith weaves into his research and his own stubborn optimism.

Somewhere between the chaos of the past and the isolation of modern life, Sennett ultimately writes, “to show how those who have been exiled from the Garden might find a home in the city.”

Posted in Movement, Space, The Body

A is for Allée

I believe that the beauty of D.C. is the simplicity of a good plan: symmetry, long vistas, and grand terminals. All of these qualities are found in the allée.

Here is a photo I took while walking the National Mall: 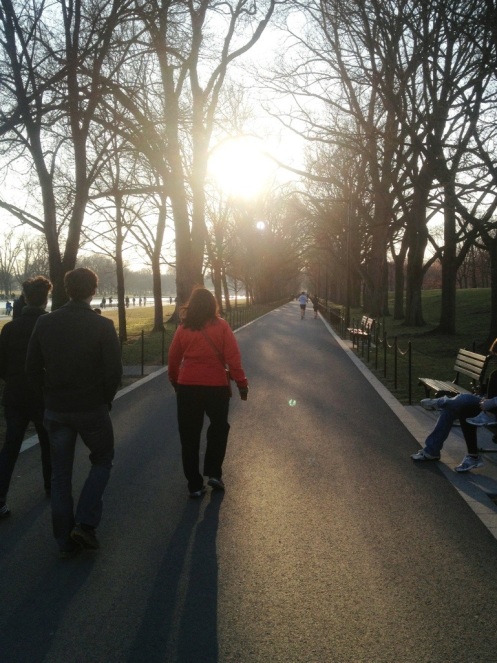 What I love about the allée is that it’s so simple. With a straight path and some lovely trees we could turn any formless green space into a memorable experience.

With the allée, a simple path becomes dramatic. A walk becomes an journey.