I would love to start drawing a map for downtown Tyler. I’ve already written extensively about an imaginary place I call the Urban Valley, but right now I have this burning question in my mind, “Do we want a downtown in Tyler?” If yes, then for what purpose?

You see, there is this crime that occurs when people try to “bring the suburbs in to the city.” I’m worried we don’t quite realize that the two concepts are completely antithetical. Suburban settlements usually have large parking lots, small wooded areas and one-story detached buildings. These should have very little relevance in a downtown. Take a look at the photo of the parking lot. Does this photo look like a city? (Side note: The city of Tyler has looked into building a parking garage here, but most likely won’t put floorspace on the first floor) The real tragedy is that there were likely beautiful buildings here that served a whole variety of purposes. Now, this entire city block serves one purpose: The storage of cars (idea cite: Douglass Rae). Urban space should be considered so valuable that buildings are next to each other, green space is a planned park or garden and cars cannot be given ultimate precedence. In all sincerity, we have enough suburbs in Tyler … please, first and foremost, let downtown be urban. 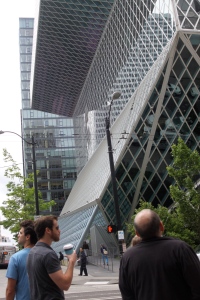 I believe that the potential of every space is limited by real and imagined barriers. If there are real, perhaps topographical, barriers to building a higher density downtown than I’ll be content to give up this dream. I just don’t think that’s the case. Most barriers I would consider “real” are primarily economic, but as long as people continue to build farther south I’ll contend that they might as well build downtown. To me, it’s the imagined barriers that I can’t stand. If it’s a zoning issue, some regulation, or a city of small dreams then I won’t be satisfied. Cities do not become great with small dreams. Cities become great when people do bold things that the mainstream calls crazy. Take, for instance, the Seattle Public Library (pictured). This building is a strikingly beautiful and completely functional structure that could theoretically be built anywhere on any square piece of land. In Seattle, they love it. Could we love this library? I should add, there are people in Tyler doing great work to revitalize our downtown, but I’m just not sure whether the public will appreciate it. 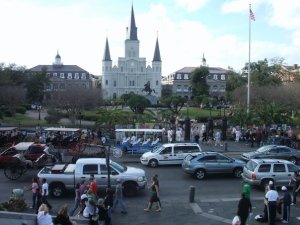 Another possible impediment to Tylerites embracing urban life is a lack of urbanity. It seems like Tylerites like to live in wooded neighborhoods rather than urban spaces. Most of Tyler is so spread out that we don’t always have to interact with people who are different from us on a regular basis. I fear we’re missing the beauty and diversity of urban life. But could it be that there is simply not a viable urban option? I say yes. I bet there are thousands of people in East Texas that are tired of mowing their lawns, driving everywhere and living far away from “the action.” I bet if we promote city life in Tyler and remove P&Z red tape then people will come from all over to create and inhabit a thriving downtown.

The other day, my friend Dustin asked me what my ideal downtown would look like if I could design it. I said that there really isn’t (or shouldn’t be) an ideal downtown. As long as there are people there at every hour of the day and night; as long as there are public spaces that welcome every citizen of the city; as long as people claim it rather than exploit it; as long as it’s traditional, deviant, creative and ultimately “Tyler,” then that will be perfect no matter what it looks like.

Look at the arial photo of Tyler to the left. These nine city blocks should not look like everywhere else in the city because if they do then they will be no longer be significant. Downtowns are places where you can live to not only experience the diversity of other people’s lives, but most importantly you can personally add to the diversity of self expression, culture, perspective, race, ethnicity, etc. When we begin to add to this multi-cultural society and invest in the community we become a part of organizations and we learn what it means to be citizens instead of consumers. I don’t want us to “consume” downtown as entertainment the same way we sometimes consume church, media and everything else. Rather, we must commit to downtown as an idea and be unified on our goal at the outset. This idea is that, in many ways, downtown is what we look to as the zenith of our city’s development. I believe there is an inherent value to dense urban downtowns as the site of culture creation, political debate and financial stability. Our downtown is a vital element of the future of our city as the capitol of East Texas. We need a viable downtown option, but we have to want it. And we have to know what it is.

Check out my other Tyler projects at my Tyler, TX page.